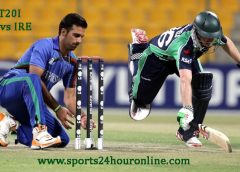 Ireland team got 4 extra runs by two leg bye and 2 no ball. The Ireland team total scored 165 run and 5 wickets in full 20 over.

Afghanistan total scored 171 runs in 18 over with 4 wickets and won by 6 wickets.

The other official website for related to sports is www.cricbuzz.com and www.espncricinfo.com