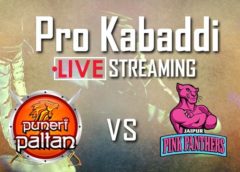 Puneri Paltan vs Jaipur Pink Panthers Today PKL Match Live Streaming Online 10 Aug 2017 – Thursday. Puneri vs Jaipur match will be played at mankapur indoor stadium. This ground located in the nagpur city. This is the 21st match of pro Kabaddi league 2017 – PKL. You can buy tickets Puneri Paltan vs Jaipur Pink Panthers match 21 at here www.in.bookmyshow.com Match ticket available from 450 Rs to 5,000 Rs. This team available in Zone A group. The match will be begin from 08:00 PM IST as per indian time zone.

In the match 21 of the PKL 2017 table toppers puneri paltan wil take on jaipur pink panthers who are lying at the last spot. The puneri paltan team have been unbeaten in both their matches. Zone A points table with 10 points on score difference.

When Puneri Paltan, playing in the captaincy of Deepak Hooda, will be on the hat-trick of victory when he landed on the field today. In the last two matches, Pune will face the challenge of Pune. Pune defeated Yu Mumba in the 1st match, after which it had defeated Delhi. Team Rage captain Alva will be on Rajesh Mondal who had performed the last time. Jaipur, standing in front of Pune, has played only one match so far. In which he had to face defeat. Abhishek Bachchan can also come in the match to increase the team’s rhythm.