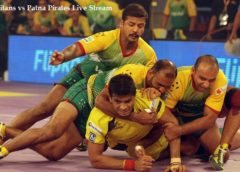 Rahul Chaudhari unlocked beast mode during game against the Tamil as he led the Titans to their maiden win and was ably supported by Nilesh Salunke, who collected 7 points apart from remaining on the mat for the whole match. When the Pirates face off against the Telugu Titans, the defense unit led by Mane will have to deal with the double threat posed by Rahul Chaudhari and Nilesh Salunke. On the other hand, Pardeep was in the form of his life and the young corners of the Titans will have to be wary of his guile.

While Pardeep is the key players for Patna, he will have Monu for company, who has not had a lot of experience in the Pro Kabaddi League – PKL. Given that the Titans defense came together well, the Patna Pirates might be missing the services of a key all-rounder or another raider. On the day, Telugu Titans might upstage the Patna Pirates owing to the balance in the team.