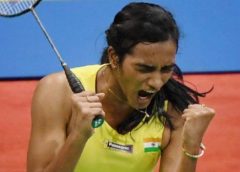 World Badminton Championships 2017 : Glasgow to be held today, Sindhu and Srikanth look at Gold Medal. Two-time bronze medalist PV Sindhu and Kidambi Srikanth, who are in form, will lead the twenty one member Indian team in the World Badminton Championship starting here on Monday – 21 August 2017, where both the shuttlers will look at gold. After winning consecutive titles in Indonesia and Australia, Srikanth would like to achieve his first medal in this championship by continuing his best goal. At the same time, Rio Olympics silver winner Sindhu will try to improve the color of the bronze medal in the 2013 and 2014 season.

Sindhu has won the 2016 China Open and 2017 India Open. He won a bronze in the 2013 and 2014 World Championships, but no player medal in the men’s section has been able to make his name. Srikanth has won two consecutive Super Series titles this year and he has great hopes of winning the medal here. Srikanth, who won gold in the South Asian Games last year, won the title in the Indonesia Open and Australia Open this year. In the first round, he will face Russian Sergei Siranth.

The first Indian woman to win the silver in the 2015 World Championship will also watch Saina Nehwal. Saina and Sindhu got the first in the round. Sindhu will start her campaign against Kim Hoy Min of Korea or Hadia Hosni of Egypt, while Saina’s Swiss player Sabrina or Ukraine’s Natalie could be up against.

Thailand Grand Prix Gold champion B Sai Praneeth in the first round, Wei Nang of Hong Kong, while 13th seed Ajay Jayaram will fight against Luca Rebar of Austria. Indian male shuttlers have won six titles so far this season. Syed Modi Grand Prix gold champion Sameer Verma is playing for the first time in this prestigious championship, which will compete with Spain’s Pablo Abian in the first round.

Manu Attri and B Sumeet Reddy, Youth Chirag Sen and Satvik Sai Raj and Arjun MR and Ramachandran Chlokas, who played in the Rio Olympics, will present the Indian challenge in men’s doubles. There will be expectations from the pair of Ashwini Ponnappa and N Sikki Reddy, Meghna and Purvisha S Ram in the women’s doubles.

Focus on the first round: Srikanth

“I am performing well, which has boosted my self-confidence but every player comes in such a big event with full fitness. I am not thinking about reaching the finals right now. Right now my focus is on the first round. Other Indians are also able to win the title in this tournament. He has worked hard for the world championship. “- Srikanth

National badminton coach Pullela Gopichand has said that this time the Indian players entering the World Championship are potentially part of the strongest team. He said, “Men’s players have been performing well for some time now. Four Indian players are the ones who have the ability to defeat the best player in the world. We are expecting a strong performance from all our players. ”

Five-time world champion and famous as ‘Super Den’, China’s Lin Dane will present a tough challenge in the men’s section. Apart from this, two-time winner and Olympic champion Chen Long, world number one Son Van Ho and Danish star Viktor Axelson will also try to win a medal. The two-time champion in the women’s category, Carolina Marin of Spain, can lead the gold medal to make it difficult for Sindhu and Saina

How to watch world badminton championship 2017